Shaping a Sustainable Future; An Encounter With Ban Ki-moon

On the 11th of March, I was one of the 3 students from Bonn’s United Nations University, selected to represent the UN in Germany at a meeting with the Secretary General Ban Ki-moon. The city of Bonn was celebrating 20 years of being the United Nations city of Germany, with the opening event themed ‘20 years of Bonn as a UN city – shaping a sustainable future in the light of volunteering’.

In his speech, Ban Ki-moon talked about the importance of gender equality, as it was also International Women’s Day. He highlighted that it has been a priority throughout his mandate as Secretary General to empower women, mainly because many women and girls across the world continue to be denied their rights. He commended people everywhere in the world who act on the knowledge that women’s empowerment leads to society’s advancement as well as tackling issues of climate change.

He went on to talk about the Sustainable Development goals; these are 17 goals aimed at improving livelihoods as well as combating the effects of Climate Change. He also talked about the Paris Agreement on climate change and that it is a ‘Peace Pact with the Planet’.

The SG highlighted that he is conscious of the many expectations that the United Nations should be more efficient, more active, and effective and deliver more to many people. However, there are criticism about the UN, for example, ‘what are you doing? What is the relevance of the United Nations?’ The SG said despite all these weaknesses, the United Nations still deliver to the people and everybody still looks up to the United Nations. The refugee crisis was also on the agenda. The SG praised the role of Germany as a strong advocate for human rights and a strong anchor of global stability.

The other key note of the night was the power of volunteering. At the end, I managed to ask him the following question,

“What can be done to make volunteer action part of an effective way to engage people and communities in the achievement of SDGs?”

He said it starts in very small ways and that we don’t have to do very big things to make a difference. It starts when we take it upon ourselves to dedicate time to make a difference and that’s the beginning towards attaining the SDG’s. As CYNESA, we aim to keep on doing what we do in the little ways we know. We are stepping forward in achieving sustainability in our communities. 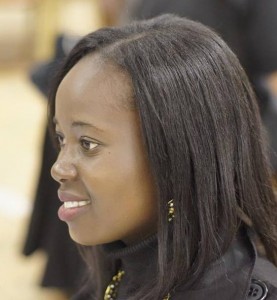 Everjoy is a Master’s Student in Environmental Risks and Human Security, at the United Nations University (Bonn) and the University of Bonn, Germany. She previously served as Country Director at CYNESA Zimbabwe.